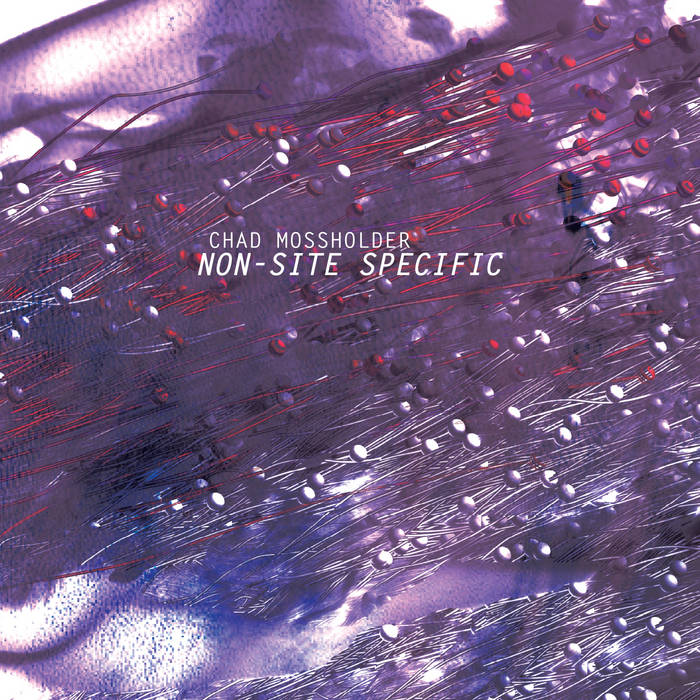 Chad Mossholder’s debut solo album, “Non-Site Specific,” departs from Twine’s sample-based manipulation and embarks on a metaphysical and mercurial journey propelling the listener through mysterious and unfamiliar territories. Entirely constructed by software synthesis, “Non-Site Specific” is a cascade of gorgeous textures, compelling melodies, intricate compositions and rhythms, and meticulous sound design. Heavily influenced by the work of Stan Brakhage, who hand-painted each individual frame of his films, Chad hand-crafts every sound and places each component manually. Rarely are elements mechanically sequenced, and when they are algorithmically sequenced, the resulting audio captures are dissected and rearranged with the utmost attention to detail and placement. This allows a symbiosis between the artist's intentions and the random processes of nature, escaping the sometimes cold feeling of electronic music and capturing the organic textures of nature and human thought processes.

Long warm tones and shuffling percussive elements delicately invite listeners into "Fennel," the opening composition. Prometheus carried fire within a hollow fennel stalk, concealing it from the gods to bring it to mortals. Correspondingly, the track conceals hidden elements of the sonic journey held within: a sonic fire delivered to the listener. Carefully constructed soundscapes, soft static beds, and exploratory rhythmic elements drift in and out of the fennel. A persistent melody pulls the elements tightly together as the music develops its beautiful subtleties.

"Slope" catches you where you were let off after "Fennel" and guides you up into the atmosphere. The air becomes thin as you leave solid ground far behind. "Framework" is the outline of the intricate device closing around you, securing you and propelling you deeper into the musical space. The next composition, "Nephilim," is the sound of the children of the gods evolving into gods themselves, an evolution not merely of genetics but of technology as well. "Azoth" refers to an alchemical medicine, the universal elixir of life, the first principal of all other substances. It is a mercurial mantra of calming and healing before the listener enters the complexities of "Cobweb."

This "Cobweb" was not woven by a single spider, but is the result of spiders building webs upon other spiders' webs. It is a labyrinth of electronic silk. The listener becomes stuck, entangled, and realizes that the web is still under construction. It is actively spinning around those trapped and waiting to be devoured. The bright and glittering realization of "Oracle" is that all hope is not lost. The listener was not spun into a spider’s web, but was cocooned, and is metamorphosing.

"Ataxia" sets in as the listener transforms into something new and strange. Movement and strength are slowly regained, and inchoate abilities are discovered. "Nascent" is the birth of new understanding. Everything comes together. We have shaped our own evolution through the alchemy ("Chymia") of science and technology. Organic flowing sounds and new electronic components work together in harmony. The album ends with "Illuminated," a revelation; dawning of new understanding. This is not the end of the spiritual journey, but the beginning of the next phase.

As an extra special bonus track commissioned for this album, sonic wizard Richard Devine (Schematic, Make Noise, Warp Records) has created a complex aleatoric recombinant masterpiece out of a thousand exploded fragments of "Illuminated" using his massive modular synthesizer, a huge ever growing pulsating brain that rules from the center of his studio near Atlanta!

Artificial Music Machine is an independent record label based in Austin, Texas; showcasing innovation across varying genres of music, at the boundary between the electronic and the organic, between the artificial and the human.

Bandcamp Daily  your guide to the world of Bandcamp

New sounds from Mavi, Ivy Sole & Moderator, plus AJ, the One joins the show, for her latest release